Notes:
– Formed during December 1980 from the ashes of Rokka. By the end of 1982 they changed their name to The Lonely Hearts and followed a slightly different music direction
– Their first recordings were the tracks ‘Blitz’ and ‘The Day Delta 4 Played Mars’ that both appeared on the compilation “Scene of the Crime” (LP, Suspect Records, 1981)
– An unreleased recording that is known to exist is a track called ‘Fm Fantasy’ which was recorded in May 1982
– Panza Division had quite of a success during their day getting positive reviews and sharing the stage with bands such as Y&T, Saxon, Girl and Twisted Sister
– Played a reunion gig at the Sheffield Boardwalk on October 24, 2010 in a line-up that also featured guitarist Andy Barrott (The Lonely Hearts, Heritage, Geddes Axe, Baby Tuckoo etc) 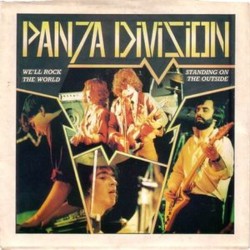 1. We’ll Rock The World
2. Standing On The Outside