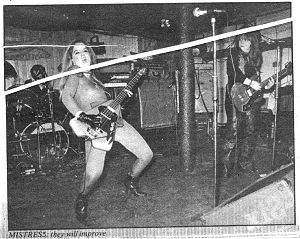 Notes:
– Mistress were an all female four piece band active during roughly 1979-1981. Not sure if they were actually Metal enough but it appears that at least had some connections with the movement and the style.
– In old issues of Sounds we read about them recording tracks for a single (19/01/80) and about a four-track cassette on Airebeat Records (16/08/80). One can also read about a ‘Mistress Fanzine’ they issued available for 50p from Airebeat Records again (09/08/80)
– Known tracks: ‘Ultimatum’,  ‘Stay With Me Tonight’, ‘Ain’t In No Condition’ and ‘Why Did You Do It?’
– Guitarist Joan Bimson has a very long history of being a session and semi-professional musician with various touring and recording acts of several different genres. Since 2000 she was following an academic career at Liverpool colleges and Universities as a Lecturer and a Popular Music Researcher. Unfortunately, Joan passed away in 2016 after a long battle with an illness. She was playing music up to the end!