Notes:
– Active during 1982-1984
– Got some airplay on local stations (including BBC Sheffield) and played several gigs around Yorkshire
– After David Pearsall left the band, they were joined by another (yet unknown) singer for some time 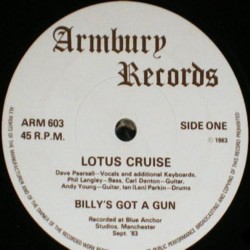 Billy’s Got A Gun

*Released without a picture sleeve

A Fistful Of Heartache