Notes:
– All band members along with singer Bob Hawthorne appeared as session musicians to Kyoji Yamamoto’s (Bow Wow / Vow Wow) solo album “Electric Cinema” (1982)
– Singer Bob Hawthorne also contributed music and songs to some films most notably “The Fourth Protocol” and had sessions with Scott Gortham (Thin Lizzy). For several years since the mid 1990s he is the mainman of the Rod Stewart Tribute Act giving shows world-wide.
– Ex-Chinatown bassist John Barr joined Last Flight on vocals after the departure of original frontman Bob Hawthorne in 1983. They played a few shows together but eventually the band folded in early 1984
– Last Flight appeared on the following compilations:
“The Friday Rock Show” (LP, BBC Records, 1981) with ‘Dance To The Music’ (different recording). The same compilation with the same tracklisting but with a different cover was released under the title “Metal Explosion Vol. 2” in 1982 by Alligator Records for the Spanish market.
“Heavy Metal Records – Singles Collection Vol. 1” (CD, British Steel, 1997) with both 7″ tracks 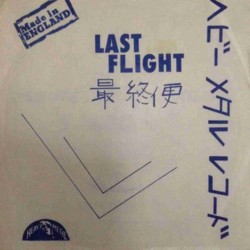 Dance To The Music

*Three-track recording missing all other details