Notes:
– Killer was the name of Tokyo Blade for a small period of time in 1980-1981. They formed in 1979 under the name White Diamond. During 1981-1983 they used the name Genghis Khan and finaly in 1983 changed it to Tokyo Blade.
– Under the name Killer they played approximatelly 20 shows 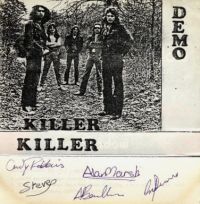