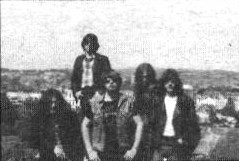 Andrew Russe (g) – also in The Chillun and Stick

Notes:
– Formed by students at Exeter university and had minor success over college and university campuses in the South West of England around the years 1982-1984
– Appeared on the compilation “It’s Unheard Of!” (LP, Sane Records, 1984) with two tracks: ‘Lost Soul’ and ‘Way Of The World’
– Apart from the above mentioned tracks, it is believed that more songs must exist in the form of demo tapes and live recordings somewhere in some basement.