Notes:
– Formed from the ashes of the Scotish band Necromancer in 1982
– Located on the Isle of Wight where they were managed by ex T-Rex road manager Mick O’Halloran. Towards the end of 1982 they moved to Bath.
– Apart from the 7″ single below, Garbo has recorded enough material for maybe more than one album at Crescent studio in Bath. At least one song ‘When The Ice Breaks’ was produced by David Lord (Peter Gabriel’s producer) at the same studio.
– Garbo moved towards a solid Glam Rock direction and in 1984 along with a few line-up changes they changed the name to Vis a Vis (not to be confused with the Scotish pop band) and eventually folded
– Bobby Hamilton, Billy Colvin and Drew Steele worked as session musicians on the remix of the posthumous Marc Bolan albums “Dance In The Midnight” in 1983 and “Till Dawn” in 1985
– It is known that in 2007 Bobby Hamilton and Billy Colvin entered Peter Gabriel’s Real World Studio and remastered the Garbo masters from 1982. This material, however, still remains unreleased 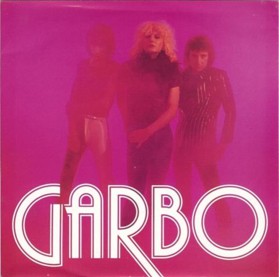 1. The Dancing Strange
2. Why Don’t You Call Me
3. Everyday Hallucinations