Notes:
– Active for just a couple of years (1981-1982)
– Also known as The Founded and Foundead
– Steve Lewis and Leah Harlow formed the band “Beauty And The Bitch” in 1986. To the best of our knowledge, Beauty And The Bitch, recorded one 3-track demo including the song ‘Walk Into My Life’ which was originally written by Founded. In 1996 changed the band name again to “A Touch Of Class”.

*Released without a picture sleeve
*The pressing plant in France mispressed the initial run of records that had Founded’s label but the recording of a French band. The band returned all the copies to the manufacturer and then received the correct records 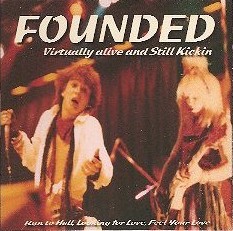