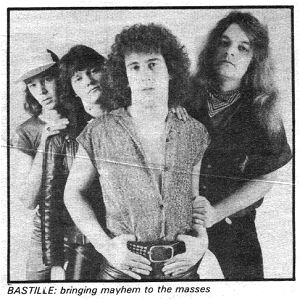 Notes:
– Formed at the height of the NWOBHM explosion in 1979
– Played several gigs and festivals and shared the stage with bands such as Angel Witch, More, Trespass, Alverna Gun, Samson and others
– Vocalist Richard Bull joined Tank in April 1981, but was sacked 6 weeks later after recording their first single and having the vocals replaced with Algy Ward’s.
– Bastille were featured in the compilations “New Electric Warriors” (Logo Records, 1980) and  “Lightnin’ To The Nations – NWOBHM 25th Anniversary Collection” (Sanctuary Records, 2005) with the song ‘Hard Man’
– Not to be confused with Bastille from California who released the 12″ EP “Signature” in 1983 and often refered as nwobhm. They were also a very obscure band and very little is known about them too.
– There was also another band with the same name in the Mansfield area during the late 1980s – early 1990s with an interesting NWOBHM influenced sound. You may check them here

*Engineered, mixed and produced with the help of Adrian Smith and Andy Barnett. The band was hoping to release these tracks as an EP in 1980. The master tape was found in 2013, nearly 34 years after the recording and can be heard on youtube. Click on the titles above.